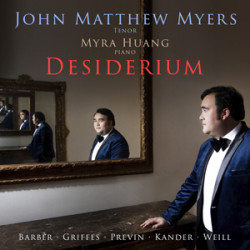 The star of tenor John Matthew Myers is rapidly in the ascendent. His debut album, Desiderium, coincides with his Metropolitan Opera debut in Brett Dean’s Hamlet. Desiderium – “an ardent desire or longing, a feeling of loss or grief for something lost” – beautifully showcases Myers’ mellifluous voice. His thoughtful programme of works by American and American émigré composers opens with Samuel Barber’s yearning Knoxville: Summer of 1915 – rarely heard sung by a tenor – and transitions to Charles Griffes’ similarly searching settings of 3 Poems of Fiona Macleod, and Andre Previn’s 4 Songs for Tenor and Piano. What follows is A Letter from Sullivan Ballou, set to the words of a poignant letter by an American Civil War officer, by John Kander (of Kander and Ebb musical theatre fame). Rounding out the recital are 4 Walt Whitman Songs by German-born composer Kurt Weill, including the classic O Captain! My Captain!

John Matthew Myers says, “Call me a big-hearted Romantic. Each song on this album conveys yearning, separation, loneliness or distance but also a sense of intimacy and longing for connection.” It certainly does. Desiderium is an auspicious debut album, and one especially attuned to our times.