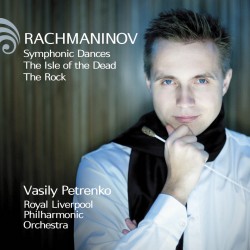 Rachmaninov: Symphonic Dances; The Isle of the Dead; The Rock

Avie’s fruitful association with the Royal Liverpool Philharmonic Orchestra yields its tenth release, and the third with Vasily Petrenko, the youngest Music Director in the RLPO’s illustrious history. A native of St. Petersburg, Petrenko appropriately continues his exploration of Russian repertoire with the first in a series of orchestral works and concerti by Rachmaninov.

Petrenko was the Classic FM/Gramophone Young Artist of the Year award in 2007, and in 2009 he and the RLPO garnered the Gramophone Award for Best Orchestral Recording. Since arriving in Liverpool in 2006, Vasily Petrenko has had a galvanising effect on the RLPO – Classic FM’s Orchestra of the Northwest – attracting unanimous critical acclaim. Having recently renewed his contract through 2015, Petrenko and the RLPO are poised to spread further afield their success story through these recordings for Avie.