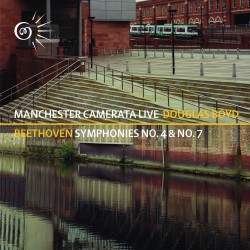 Following their AVIE debut of Beethoven’s Symphonies Nos. 2 and 5 (AV 0040), Douglas Boyd and Manchester Camerata offer stylish and enthusiastic performances of Beethoven Symphonies Nos. 4 & 7. The earlier work sees the more classical and traditional composer using a smaller scale orchestra but nevertheless, this is still Beethoven in full power. Recent studies and the absence of surviving sketches suggest that it was composed in one creative burst, being finished in one week in the summer of 1806. By contrast, the 7th Symphony sees Beethoven at the height of his powers. It gives a glimpse of the writing and energy that Beethoven would make his own.