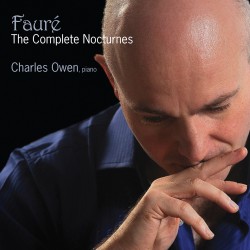 Gabriel Fauré’s set of thirteen Nocturnes for solo piano contain some of the most beautiful and original pieces that the composer created. Their composition over half a century (1870 – 1921) charts the development of a highly personal voice beginning with the Chopinesque early works and
culminating in the passionate outpourings of the final masterpieces.

A graduate of the Royal College of Music, Charles Owen has performed in Britain’s leading concert halls including the Barbican, Queen Elizabeth Hall, Wigmore Hall and Symphony Hall, Birmingham. Internationally, he has appeared at New York’s Lincoln Center and Carnegie/Weill Recital Hall, the Brahmssaal in the Vienna Musikverein, the Paris Louvre, the St. Petersburg Philharmonic and the Moscow Conservatoire. He has performed with celebrated orchestras including the Philharmonia, Royal Scottish National, London Philharmonic, and the Moscow State Academic Symphony. He has collaborated with many outstanding artists including violinists Jack Liebeck and Renaud Capucon, and cellists Natalie Clein and Guy Johnston. In addition, Charles has appeared with the Vogler Quartet and the Haffner Wind Ensemble. His previous recordings have been cited by The Penguin Good CD Guide as a “key” recording, an Editor’s Choice in Gramophone, and a Classical Brit Award. Charles Owen is a Professor at the Guildhall School of Music and Drama in London.