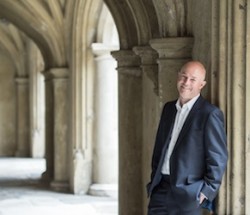 Described by Gramophone magazine as “one of the finest British pianists of his generation”, Charles Owen has enjoyed an extensive international career performing a wide ranging repertoire to outstanding critical acclaim.

He has appeared at London’s Barbican and Queen Elizabeth Hall and regularly gives recitals at the Wigmore Hall. Internationally, he has performed at Lincoln Center and Carnegie Hall in New York, the Brahms Saal in Vienna’s Musikverein, the Paris Musée d’Orsay, and the Moscow Conservatoire. His chamber music partners include Julian Rachlin, Chloe Hanslip, Augustin Hadelich and Nicholas Daniel as well as the Vertavo, Takacs and Elias Quartets. He also enjoys a highly successful piano duo partnership with Katya Apekisheva. Together they are Artistic Directors of the London Piano Festival.

Charles studied in London at the Yehudi Menuhin School and the Royal College of Music with Irina Zaritskaya and Imogen Cooper. His numerous awards include the Silver Medal at the Scottish International Piano Competition (1995) and the 1997 Parkhouse Award with violinist Katharine Gowers.

A regular guest at festivals such as Aldeburgh, Bath, Cheltenham, Leicester and Perth in Australia, he has also performed with the Philharmonia, Royal Scottish National and London Philharmonic orchestras.
Charles’ solo recordings comprise discs of piano music by Janácek, Poulenc and the complete Nocturnes and Barcarolles by Fauré. Chamber music discs include the cello sonatas of Brahms, Rachmaninov and Chopin with Natalie Clein and the Stravinsky Piano Ballets with Katya Apekisheva.

Charles Owen is a Professor of piano at the Guildhall School in London.