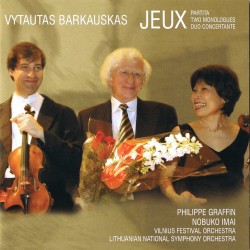 “I have always associated Vilnius with two things – the birthplace of the legendary Jascha Heifetz, and also a composer named Vytautas Barkauskas, whose best-known work for solo violin, Partita, I have loved since I was a teenager. When the opportunity came for me to give a concert in the Lithuanian capital, I went in search of both.” So said the enterprising violinist Philippe Graffin, whose other notable and critically acclaimed CDs for Avie include the world-premiere recording of Samuel Coleridge-Taylor’s Violin Concerto (AV 0044) and the Bohemian-inspired works of Debussy, Ravel and Enescu on In the shades of forests (AV 2069). Philippe’s enquiring mind took him on a journey that led to this CD featuring works by Lithuania’s most notable living composer, including the world-premiere recording of the Duo Concertante for violin, viola and orchestra, with leading Japanese violist Nobuko Imai. Barkauskas’ music is bold and atmospheric, a compelling and powerful aural experience. He says, “Music is everything for me: miracle, mysticism, celebration, profession, pleasure, and ultimately – the reason for living!”