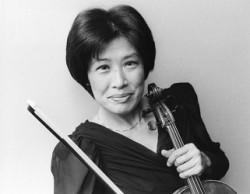 Nobuko Imai studied at the famous Toho School of Music in Tokyo and then at Yale University and the Juilliard School.

She is the only violist to have won the highest prizes at both the Munich and Geneva International Viola Competitions, and she was formerly a member of the esteemed Vermeer Quartet. Miss Imai is now established as a distinguished international soloist, and as well as appearing regularly in the Netherlands, where she now lives, her career takes her to major cities in Europe, the USA and Japan.

Nobuko Imai has been awarded many prizes, including the Avon Arts Award (1993), the Education Minister’s Art Prize of Music by the Japanese Agency of Cultural Affairs (1994) and the Mobil Prize of Japan (1995). In 1996 she received Japan’s most prestigious music prize, the Suntory Hall Prize, awarded to her by a unanimous jury. She is Professor at the College of Music in Detmold, Germany.