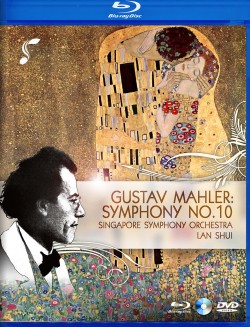 Commemorating the 150th anniversary of Gustav Mahler’s birth is a very special release from The Singapore Symphony Orchestra and their Music Director, Lan Shui: a performance of Mahler’s Symphony No. 10 in the seldom heard completion by American musicologist Clinton Carpenter, on Blu-ray and DVD. Recorded live in the spectacular Esplanade Concert Hall in Singapore, this is the first known video release of Carpenter’s realisation of Mahler’s enigmatic final symphony. Adding to the uniqueness of the release is Wu Xing (The Five Elements), a work by one of today’s leading Chinese composers, Chen Qi-gang. Commissioned by Radio France in 1998, Qi-gang’s popular Wu Xing was born out of the idea of wanting to write five short pieces, each representing a different symbol. “From there,” states Qi-gang, “the idea of representing the Five Elements musically was born.” Bonus features include interviews with Lan Shui and photographs from the Mahler 10 recording sessions. The printed booklet is in English, French, German, Japanese & Chinese while the interview is spoken in English and subtitled in Chinese, French, Japanese and German.

The American Record Guide has compared Lan Shui’s achievements with the Singapore Symphony Orchestra to those of George Szell in Cleveland and Simon Rattle in Birmingham. He has recorded over a dozen discs that have garnered wide-spread acclaim and a Grammy nomination.