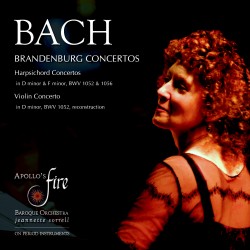 Apollo’s Fire, the Cleveland Baroque Orchestra founded in 1992 by award-winning harpsichordist and conductor Jeannette Sorrell, launches a major new association with Avie with this release of varied works by J. S. Bach, together with an album of works by Mozart (AV 2159), that exemplify “the intense detailing Sorrell and company bring to music from the Baroque and Classical eras.” (The Cleveland Plain Dealer). These vibrant performances feature popular repertoire brought together in pairings that have not appeared on disc before: the ever-popular Brandenburg Concertos uniquely coupled with two Harpsichord Concertos, one of which is also presented in a reconstruction for violin.

Taking its name from the classical god of music and the sun, Apollo’s Fire is dedicated to the performance of 17th- and 18th-century music on period instruments. Founder and Music Director Jeannette Sorrell and her ensemble of dynamic and creative early-music artists from North America and Europe have been praised internationally for stylistic freshness and buoyancy, animated spontaneity, technical excellence, and creative programming. An award-winning harpsichordist and conductor, Sorrell studied with Gustav Leonhardt in Amsterdam and Leonard Bernstein at Tanglewood. Praised for its “temperament and personality” by The New York Times, the ensemble will embark on its first European tour in November 2010, performing in Spain, the Netherlands and the UK.

“A swaggering version… The most is made of the instrumental colours Bach so exhilaratingly put onshow. The keyboard part in the 5th Brandenburg is brilliantly played by Sorrell.”
– The Sunday Times

“One word – wow! Where has this recording been? Nothing short of spectacular.”
– Audiophile Audition

“Sorrell delivers a brilliant take-no-captives rendition of the big solo in No. 5. In all, these performances are lively and unfailingly attractive—the best in what historical performance can be… an impressive treasure.”
– American Record Guide

“Cleveland’s phenomenal early music group Apollo’s Fire ought to be proud of this release… Led by Jeannette Sorrell from the harpsichord, the group is vibrant and fully engaged in making lively music, so the performances are far from stodgy museum pieces. The group takes a few risks, such as the rowdy embellishment of the hunting horns in the Brandenburg Concerto No. 1… the pungent oboes and airy recorders have distinctive tone colors that are almost rustic. For musicality and the sheer pleasure of hearing them play, Apollo’s Fire is a delight and a treasure… This album should be admired by listeners everywhere.”
– allmusic.com 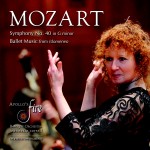