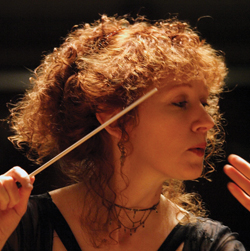 Jeannette Sorrell is a leading creative voice among the new generation of early-music conductors. She has been credited by the U.K.’s BBC Music Magazine for forging “a vibrant, life-affirming approach to the re-making of early music… a seductive vision of musical authenticity.”

Born of Swiss and American parents, Sorrell studied conducting at the Aspen and Tanglewood music festivals under Roger Norrington and Leonard Bernstein, and harpsichord with
Gustav Leonhardt in Amsterdam. She won both First Prize and the Audience Choice Award in the 1991 Spivey International Harpsichord Competition, competing against over 70 harpsichordists from Europe, Israel, the U.S., and the Soviet Union.

Since founding Apollo’s Fire in 1992, she has led the orchestra in sold-out concerts throughout North America and Europe – including the BBC Proms, London’s Wigmore Hall, Madrid’s Royal Theatre (Teatro Real), Boston’s Early Music Festival, the Tanglewood and Aspen Music festivals, the Library of Congress, and the Metropolitan Museum of Art in New York. She is in demand as guest conductor and harpsichord soloist with many of the finest symphony orchestras of the U.S., including the Pittsburgh Symphony, Seattle Symphony, Utah Symphony, Los Angeles Chamber Orchestra, New World Symphony in Miami, the Handel & Haydn Society in Boston, and the Opera Theatre of St. Louis with the St. Louis Symphony. She debuts with the St Paul Chamber Orchestra and the National Symphony Orchestra (Washington, DC) in 2017.

Sorrell and Apollo’s Fire have released 25 commercial recordings, of which 7 have been bestsellers on the Billboard classical chart. Her recordings include the complete Brandenburg Concerti and harpsichord concerti of Bach (with Sorrell as harpsichord soloist and director), which was praised by the London Times as “a swaggering version… brilliantly played by Sorrell.” She has also released four discs of Mozart, and was hailed as “a near- perfect Mozartian” by Fanfare Record Magazine. Her explorations into historical folk music have been compared with the work of Jordi Savall, and have resulted in four best-selling CD’s: Come to the River – An Early American Gathering; Sacrum Mysterium – A Celtic Christmas Vespers; Sugarloaf Mountain – An Appalachian Gathering; and Sephardic Journey – Wanderings of the Spanish Jews.

Sorrell has attracted national attention and awards for creative programming. She holds an honorary doctorate from Case Western Reserve University, two awards from the National Endowment for the Arts for her work on early American music, and an award from the American Musicological Society. Passionate about guiding the next generation of performers, Ms. Sorrell has led many baroque projects for students at Oberlin Conservatory.