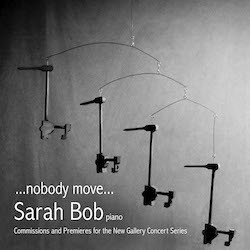 … nobody move … : Commissions and Premieres for the New Gallery Concert Series

Pianist Sarah Bob is a passionate and trailblazing advocate of the music of our time who has introduced the music of a multitude of living composers to the world. … nobody move … is a collection of works by six award-winning composers whom Sarah commissioned for the Boston-based New Gallery Concert Series which she founded 20 years ago. Her exuberance and exactitude are common threads tying together the album’s diverse musical dialects, from Jonathan Bailey Holland’s evocative chord clusters in The Intimacy of Harmony to Curtis K. Hughes’ electro-acoustic Avoidance Tactics #1 and his varied suite of miniatures, vestibulations; from the late Lee Hyla’s energetic Solo Cadenzas from his large-scale chamber work My Life on the Plains, lovingly arranged by Sarah Bob, to David Rakowski’s cheeky Mind the Gap #18, tender Wayo and edgy Ghepardo; from Shaw Pong Liu’s powerful Never Has Been Yet which sets Langston Hughes’ poem Let America Be America Again; to Randall Woolf’s fearlessly virtuosic title track. … nobody move … is a striking album that ranges from in-your-face to contemplative moods, entertaining the ears of contemporary music lovers and novices alike. 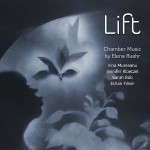