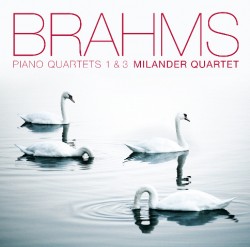 “Four excellent instrumental soloists have created a perfect ensemble” – was the critical response following The Milander Quartet’s debut at the Philharmonie in Munich. Since then the Quartet has quickly become popular in Germany and throughout Europe. With this release, the first of two surveying the Brahms Piano Quartets, the Milanders make their recording debut. Anchored by pianist Milana Chernyavska, who has collaborated with such artists as Julia Fischer and Adrian Brendel and recorded a solo disc for EMI, this continental ensemble of Ukrainian, French and Swiss-Hungarian musicians has been praised for its dedicated, sensitive and passionate playing. They have performed at festivals such as the Lucerne, Verbier, Schleswig-Holstein, Marlboro, Rheingau, the Casals Festival in Puerto Rico and the Festival de Radio France at Montpelier, and in venues including Carnegie Hall in New York, the Philharmonie in Berlin, Musikverein in Vienna, Wigmore Hall in London, Concertgebouw in Amsterdam, Suntory Hall in Tokyo, Herkulessaal in Munich, Théâtre du Châtelet in Paris, Alte Oper Frankfurt, Moscow Conservatory, and St. Petersburg’s Philharmonic Hall.

The Milander Quartet’s recording debut extends to legacy of the late producer John Barnes who brought many young artists to Avie, including award-winning pianist Luiza Borac and violinist Rudens Turku, who collaborated with Milana Chernyavska on his first release for Avie. This recording was among John’s final projects.