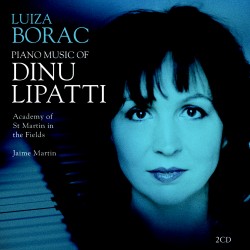 Pianist Luiza Borac is the most dedicated champion of music from her native Romania. She was recognised with a BBC Music Magazine Award for her artistry and advocacy of the piano canon of Georges Enescu. She now turns to another compatriot best known as one of the greatest pianists of the 20th century who was also during his short lifetime a celebrated composer: Dinu Lipatti. With influences that range from the counterpoint of Bach to the lyricism of Chopin and the folk-tinged soundscapes of Enescu (Lipatti’s godfather), as well as his teachers Paul Dukas and Nadia Boulanger, Lipatti forged an individual voice over the 18 years of his compositional career.

The rarities that Luiza has unearthed for this 2-disc set include a number of world-premiere recordings including Lipatti’s first Piano Sonata, an arrangement of Albeniz’s Navarra, and the complex Fantasie. For the Concertino in Classical Style, Lipatti’s first published composition, Luiza is joined by the Academy of St. Martin in the Fields conducted by Jaime Martin. Aiming to recreate Lipatti’s sound world as faithfully as possible, Luiza performs on a Bechstein piano, Lipatti’s instrument of choice.

In a tribute written shortly after Lipatti’s death at the age of 33, Nadia Boulanger wrote, “When the compositions of Dinu Lipatti are all printed, the greatness of his gift and of his craftsmanship will be recognised.” Through these recordings, Luiza Borac reveals the extent of those gifts which can be appreciated to a fuller extent than ever before. 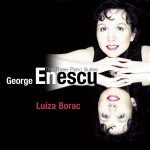