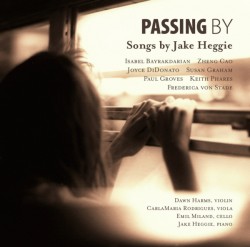 Passing By: Songs by Jake Heggie

One of the leading American composers of his generation, Jake Heggie arrives on Avie with Passing By, a gorgeous collection of recent songs and duets performed by a stunning array of international singers and instrumentalists. Fresh from the extraordinary success of The Dallas Opera premiere of his opera Moby Dick – “a wonderful and rare reminder that new opera truly can excite people if it’s done right,” according to The Washington Post – Guggenheim Fellowship recipient Heggie describes this collection as “songs that tell stories about now and then. Reflections of family, friends and lovers passing by. A missed or mistaken connection, a moment when everything might have been different. People who entered our lives and would be there forever, then suddenly were not there at all.”

Indelibly associated with his acclaimed operas, including Dead Man Walking (which made the Top 10 of Billboard’s Classical Chart), Three Decembers and The End of the Affair, Jake’s heart and soul lie in storytelling through song. With lyrics and poetry by the likes of A.E. Housman, Terrence McNally and Rilke, the songs of Passing By reflect the great American songbook tradition, replete with achingly beautiful melodies and striking observations of life’s journeys.

As Passing By illustrates, Jake’s music is championed by the most illustrious international signers, many of whom he has also collaborated with as a pianist. He has received commissions from San Francisco Opera, Houston Grand Opera, Dallas Opera, Carnegie Hall and the Los Angeles Philharmonic, and has had performances as far afield as Australia, Austria, Germany, Ireland and Sweden and South Africa. 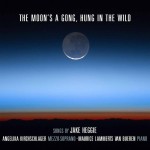 The moon’s a gong, hung in the wild