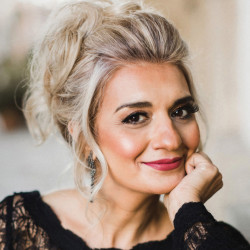 It’s not every prima donna who can boast a degree in Biomedical Engineering, but then, Isabel Bayrakdarian isn’t your average prima donna. As a highly sought-after soprano at opera houses and concert halls across the world, the Lebanese-born Canadian-Armenian-American soprano has become as celebrated for her beauty, presence, and style as for her strikingly multidimensional voice.

Isabel has toured the globe to appear with the premier orchestras and most prestigious opera companies, performing under the batons of renowned conductors like Seiji Ozawa, James Conlon, David Zinman, Michael Tilson Thomas, and Alan Gilbert to name a few. She was also the featured vocalist on the Grammy® Award-winning soundtrack from the blockbuster film The Lord of the Rings: The Two Towers, and on the soundtrack of Atom Egoyan’s Ararat. She sang on the BBC-produced short film Holocaust: A Music Memorial Film from Auschwitz, as well as her own Gemini-nominated film Long Journey Home, documenting her first visit to her ancestral homeland, Armenia.

She is the winner of four consecutive Juno Awards, and her latest recording for AVIE Records, Armenian Songs for Children, was released in 2021 to great critical acclaim. In 2020 she also collaborated with the Grammy-nominated Canadian rock band Glass Tiger singing a track on their first-ever Christmas album, Songs for a Winter’s Night.

She holds an Honorary Doctorate from Canada’s Wilfrid Laurier University, and an Honorary Fellowship from the Royal Conservatory of Music. When she’s not singing, she’s teaching others how to sing at the University of California Santa Barbara (UCSB), where she is Full Professor, Director of Opera Theatre, and Head of the Voice Area in the Music Department.