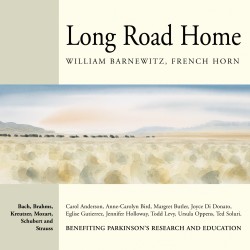 Composers develop their own voice and personality; singers develop their own vocal character and colour. This beautiful and unusual recital disc by Bill Barnewitz, principal horn of the Milwaukee Symphony Orchestra, explores the voice of a special instrument and of a particular musician. Bill offers chamber works which feature the horn either as a solo personality or integrated into an ensemble. There are songs in which the horn is included, in its own right, as a partner to the voice. Bill also performs two of his own transcriptions in which the horn replaces the singer, taking on both the original voice part and the text. Throughout, Bill, like an operatic interpreter, assumes a variety of roles and uses the full expressive resources of his instrument to bring a variety of personalities to life.

Long Road Home is a passionate and personal project for Bill Barnewitz. In 2001, he was diagnosed with Parkinson’s Disease, not, in his own words, “a welcome event in my life.” As he has adjusted to the permanence of his affliction, he has met others coping with the disease, found many who are working in support capacities such as research, education and cure, and many more who want to help. Long Road Home is a collaboration of those in the latter group, fellow-musicians and friends who have devoted themselves to this project, to make an enjoyable recording that also raises money to support a worthy cause.