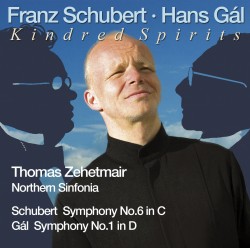 Gál’s Symphony No.1 was not in fact his first – an earlier symphony had won the Austrian State prize in 1915, but it was later discarded, as was another. Gál finally considered this work, which won a Columbia Schubert Centenary Prize in 1928,
to be his symphonic debut. The music speaks through its bold and persuasive conception and uninhibited climaxes, reflecting the composer’s sense of truly having found his own voice. The writing is virtuosic and the orchestration colorful.

Featuring Northern Sinfonia in their spectacular venue Hall One of The Sage Gateshead, these recordings underscore Zehetmair’s hallmark electrifying intensity, precision and vision.

Recorded 18-19 November 2009 (Schubert) and 27-28 September 2010 in Hall One of The Sage Gateshead, England
Produced, engineered and edited by Simon Fox-Gál