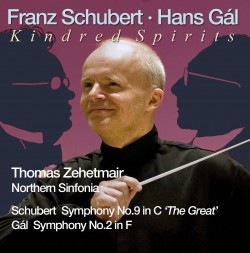 Hard on the heels of the world-premiere recording of Hans Gál’s First Symphony (AV 2224), internationally celebrated conductor Thomas Zehetmair follows with a superb value 2-CD set including the first ever recording of Gál’s Second Symphony, alongside Schubert’s “Great” Ninth. The release showcases two ends of a great melodic tradition, presenting Gál’s music alongside 19th-century symphonic repertoire that represents its roots and core values.

Gál’s Second Symphony is perhaps the most personal of his four, with an emotional depth and haunting beauty that inspired Gál’s biographer, Wilhelm Waldstein, to write of the slow movement: “it is, I dare to assert, the most important Adagio since Bruckner.” Written in 1942-43, during the darkest war years, this symphony distils the process of overcoming pain and loss into the language of pure music.

Featuring Northern Sinfonia in their spectacular venue Hall One of The Sage Gateshead, these recordings underscore Zehetmair’s hallmark electrifying intensity, precision and vision.

Recorded 13-14 January 2010 (Schubert) and 29-30 September 2010 in Hall One of The Sage Gateshead, England
Recording produced, engineered and edited by Simon Fox-Gál