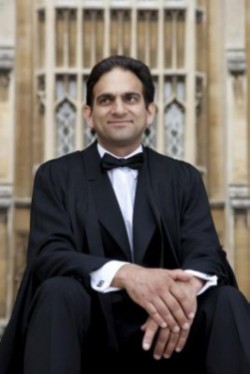 Andrew Nethsingha is Director of Music at St John’s College, Cambridge. He is also President of the Cathedral Organists’ Association. He has performed in the UK, North America, South Africa, China and many European countries. His concerts in recent months have been in Germany, Hungary and Holland.

Andrew’s early musical training was as a chorister in Exeter Cathedral, where his father was Organist for over quarter of a century. He later studied at the Royal College of Music, where he won seven prizes, and at St John’s College, Cambridge. He has held Organ Scholarships under Dr Christopher Robinson and Dr George Guest. He worked at Wells, Truro and Gloucester Cathedrals before taking up his present post in September 2007. Other recent positions have been as Artistic Director of the Gloucester Three Choirs Festival and Musical Director of Gloucester Choral Society.

Andrew has worked regularly with some of the UK’s leading orchestras. Performances with the Philharmonia have included Britten War Requiem, Mahler Symphony no. 8 and Elgar The Kingdom as well as a programme of Vaughan Williams and Finzi broadcast on BBC Radio 3. His most recent performances with the Royal Philharmonic Orchestra have included Gershwin An American in Paris and Elgar Sea Pictures. He has also worked with the City of Birmingham Symphony and BBC Concert Orchestras and conducted a performance of Handel’s Messiah in Beijing.