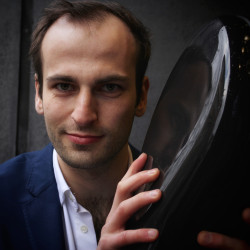 Lauded for ‘delicate yet virtuosic’ playing (BBC Music Magazine) and ‘seamless subtleties of tone colour’ with ‘plenty of edge’ (The Strad), Swiss-French-German cellist Christoph Croisé is quickly building an international reputation as one of the most captivating young concert soloists to emerge in recent years.

Born in 1993, he made his New York debut at the age of 17 at Carnegie Hall, where he has performed on several occasions since. Today, his busy international performing schedule includes regular appearances in many of the world’s renowned concert halls, among them the Tonhalle Zurich, London’s Wigmore Hall, the Vienna Konzerthaus, Munich’s Residenz, the Capella and the Philharmonia of St Petersburg, and the Azerbaijan State Philharmonic Hall in Baku. He has given a number of live radio and television concerts, for broadcasters Bavarian Radio, Norddeutscher Rundfunk, WQXR, BBC, RTS, RSI, SRF and WMFT, among others.

His debut album with Oxana Shevchenko was released in May 2015 on Quartz Classics, his second album, Summer Night, including Othmar Schoeck’s cello concerto, was released in February 2018 on GENUIN classics, and his third album (Haydn, Vivaldi Cello Concertos) was released in March 2019 on AVIE Records, winning the Supersonic Award from Pizzicato Magazine and the ‘Clef d’or’ for the best concerto album of 2019 from ResMusica Magazine. His fourth release and second on AVIE, The Russian Album with pianist Alexander Panfilov, was released in November 2019.

Croisé is often involved in baroque projects as a complement to modern performance. He has worked extensively in the field, performing as soloist with Il Pomo d’Oro and working with Maurice Steger and Nicolas Altstaedt. In 2020 and 2021 he released a CD and video of the complete set of Viola da Gamba sonatas and six Cello Suites by J.S. Bach, performing on a 1720 Guarneri ‘Filius Andrea’ baroque cello.

In addition to performing, he is passionate about helping young cellists develop as musicians and has given international masterclasses in prestigious venues such as the St Petersburg Conservatory, the “Festival of young European soloists” of Venezuela’s El Sistema and the “Masterclass de Música“ in Granada/Spain.

Croisé is artistic director of the Niederlenzer Musiktage, a classical and electronic music festival taking place every year at the end of May in Switzerland.

Croisé began playing the cello at the age of seven under the tutelage of Katharina Kühne. Since 2007, he has been studying with Alexander Neustroev and, as of 2013, with Wolfgang Emanuel Schmidt at the Berlin University of the Arts. He has additionally benefited from major artistic advice from Steven Isserlis, Michael Sanderling, David Geringas, Walter Grimmer and Frans Helmerson.

Croisé plays a rare Italian master cello, crafted in 1680. He is very thankful for the multiple scholarships granted to him in recent years by the Lyra Foundation.