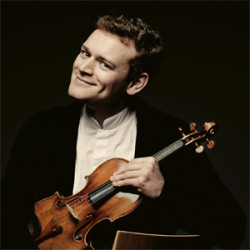 The Süddeutsche Zeitung has described Sebastian Bohren as ‘one of the most serious-minded, forthright musicians of his generation’. He regularly makes concerto appearances with orchestras such as the the Royal Liverpool Philharmonic Orchestra, NDR Radiophilharmonie, Sinfonieorchester Basel, Luzerner Sinfonieorchester, Orchestra della Svizzera italiana, Münchener Kammerorchester, Deutsche Staatsphilharmonie Rheinland-Pfalz and

Sebastian Bohren was born in 1987 and trained with Jens Lohmann, Robert Zimansky and Zakhar Bron in Zurich, before studying with Igor Karsko in Lucerne and Ingolf Turban at the University of Music and Performing Arts Munich. Other mentors include Ana Chumachenco, Hansheinz Schneeberger, Dmitry Sitkovetsky and Christian Tetzlaff. He plays a 1761 violin made in Parma by Giovanni Battista Guadagnini, the ‘Ex-Wanamaker-Hart’.