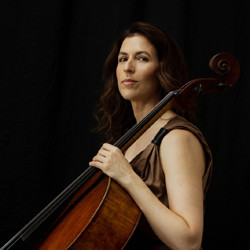 Inbal Segev is “a cellist with something to say” (Gramophone). Combining rich tone and technical mastery with rare dedication and intelligence, she has appeared with orchestras including the Berlin Philharmonic, London Philharmonic, Israel Philharmonic, Baltimore Symphony, St. Louis Symphony and Pittsburgh Symphony, collaborating with such prominent conductors as Marin Alsop, Stéphane Denève, Lorin Maazel, Cristian Măcelaru and Zubin Mehta.

Committed to reinvigorating the cello repertoire, she has commissioned new works from Timo Andres, Avner Dorman, Gity Razaz, Dan Visconti and Anna Clyne. Recorded with Alsop and the London Philharmonic for Avie Records, Segev’s 2020 premiere recording of Clyne’s new cello concerto, DANCE, was an instant success, topping the Amazon Classical Concertos chart; its opening movement was chosen as one of NPR Music’s “Favorite Songs of 2020,” receiving more than seven million listens on Spotify, and Segev has continued to tour extensively with the piece. At the start of the pandemic, she launched “20 for 2020,” a commissioning, recording and video project featuring 20 cutting-edge composers, including John Luther Adams, Viet Cuong and Vijay Iyer, who is also writing a concerto for Segev to premiere in and perform throughout the 2022-23 season. Her previous discography includes acclaimed recordings of the Elgar Cello Concerto, Romantic cello works, and Bach’s Cello Suites, while her popular YouTube masterclass series, Musings with Inbal Segev, has thousands of international subscribers and over two million views to date.

A native of Israel, at 16 Segev was invited by Isaac Stern to continue her cello studies in the U.S., where she earned degrees from Yale University and the Juilliard School, before co-founding the Amerigo Trio with former New York Philharmonic concertmaster Glenn Dicterow and violist Karen Dreyfus. Segev’s cello was made by Francesco Ruggieri in 1673.