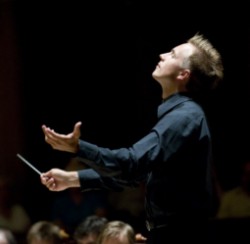 Born in 1976, he started his music education at the St Petersburg Capella Boys Music School – the oldest music school in Russia. He then studied at the St Petersburg Conservatoire and has also participated in masterclasses with such major figures as Ilya Musin, Mariss Jansons, Yuri Temirkanov and Esa-Pekka Salonen.

Between 1994 and 1997, Petrenko was Resident Conductor at the St Petersburg State Opera and Ballet Theatre in the Mussorgsky Memorial Theatre. During this time he gained an enormous amount of operatic experience and he now has over 30 operas in his repertoire. In March 2004 he made a highly successful debut at the Hamburg State Opera conducting Tchaikovsky’s Pique Dame. During recent seasons Petrenko has conducted many key orchestras in Russia including the St Petersburg Philharmonic and the Moscow Philharmonic.

The 2006-07 season saw his US debut with the Milwaukee and Indianapolis Symphony Orchestras and in Europe with the NDR Radiophilharmonie, Hannover. Return engagements include working with the BBC National Orchestra of Wales, and with the Cadaqués and Castilla y León Orchestras in Spain, and in a production of Boris Godunov with the Netherlands Reisopera.