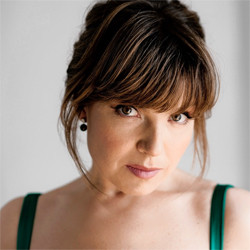 “An actor-singer who can raise the dramatic heat as soon as she enters the stage” (Opera Now), “that most questing, resourceful and intelligent of sopranos” (Daily Telegraph), British soprano Claire Booth has been widely acclaimed for her “radiant, rapturous, wonderfully nuanced performances” and voice of “piercing purity [and] luscious richness” (The Scotsman). She is renowned for her breadth of repertoire, and for the vitality and musicianship that she brings to the operatic stage and concert platform, with a versatility that encompasses repertoire spanning from Monteverdi and Handel, through Rossini, Berg and Britten, to a fearless commitment to the music of the present day.

Booth’s performances in 2019 and 2020 provided a perfect showcase for her multifaceted vocal skills and interests, including the title role in Handel’s Berenice for the Royal Opera House’s first production of the opera since it’s 1737 Covent Garden premiere, and Nitocris in Handel’s Belshazzar for the Grange Festival, performances of Tippett’s A Child of Our Time with the City of Birmingham Symphony at Hamburg’s Elbphilharmonie, George Benjamin’s A Mind of Winter with the Hong Kong Philharmonic, and the world premiere of Alex Woolf’s A Feast in the Time of Plague for Grange Park Opera.

She has gained notable critical acclaim as “the stunning voice of operatic isolation” for a series of “viscerally powerful” (The Times) performances of La Voix Humaine; following a streamed performance for Grange Park Opera and a video performance specially recorded under lockdown conditions for Welsh National Opera, which earned her Best Actress at the Welsh Theatre Awards, she brought Poulenc’s solo tour-de-force in a triumphant return to London’s Wigmore Hall, with Opera Today praising her “thorough assimilation of both text and music and the intelligence of her delivery. Her intonation is flawless, and her diction perfectly clear […] it is the very unvarnished quality, an honesty of expression, that is perhaps her greatest asset. Such is her portrayal that one watched mesmerised by something excruciatingly real…” Plans for 2021 and beyond include future performances of La Voix Humaine for WNO, concerts of Stravinsky’s Pulcinella with the Scottish Chamber Orchestra, Vivier’s Lonely Child with Ilan Volkov and the London Sinfonietta, a recording of Vivaldi cantatas with La Serenissima, and the world premieres of song cycles by Mark Anthony Turnage and Colin Matthews at the Wigmore Hall and Aldeburgh Festival respectively.

While still a student at London’s Guildhall School of Music and Drama, Booth came to international attention performing the world premiere of Sir Harrison Birtwistle’s Io Passion at the Bregenz and Aldeburgh Festivals, and creating the role of Pakriti in Jonathan Harvey’s Wagner Dream in Pierre Audi’s production for the Netherlands Opera. Subsequent roles have included Rosina in Il Barbiere di Siviglia and Elcia in Mose in Egitto for Welsh National Opera, Janacek’s Cunning Little Vixen for Garsington Opera, Romilda in Handel’s Serse for the Early Opera Company, Dorinda in Handel’s Orlandoand Ellida in Craig Armstrong’s The Lady from the Sea for Scottish Opera, Nora in Vaughan Williams’ Riders to the Sea for English National Opera, Adele (Le Comte Ory) for Chelsea Opera Group, Despina for Opera Nantes-Angers, and solo performances at the Royal Opera House Covent Garden of both Kurtag’s Kafka Fragments and Georg Friedrich Haas’ Atthis.

Booth’s wide-ranging concert appearances have included Britten’s Les Illuminations with the BBC Scottish Symphony, Schoenberg’s Pierrot Lunairewith the Psappha Ensemble, Anne Trulove in Stravinsky’s The Rake’s Progress with the City of Birmingham Symphony, Miranda in Thomas Ades’ The Tempest with Amsterdam’s Royal Concertgebouw Orchestra Amsterdam, and Mrs Foran in Turnage’s The Silver Tassie with the BBC Symphony. Booth’s two decades of collaboration with the late Oliver Knussen included her world premieres of his Requiem: Songs for Sue with the Chicago Symphony Orchestra and O Hototogisu!with the Birmingham Contemporary Music Group, and she has given over 60 world premieres of compositions by composers as diverse as Elliott Carter, Tansy Davies, Ryan Wigglesworth, Mark-Antony Turnage, Charlotte Bray and Unsuk Chin, and built close associations with the BBC Symphony Orchestra and the BBC Proms, the London Sinfonietta and Ensemble Intercontemporain, the Aldeburgh and Holland Festivals, as well as working with prestigious ensembles worldwide including the Mahler Chamber Orchestra, Deutsches Symphonie-Orchester Berlin, Boston Symphony Orchestra, and the London and Tokyo Philharmonic Orchestras.

For more than a decade she has collaborated with video director Netia Jones to produce a series of critically acclaimed productions, including her performances of Max in Knussen’s Where the Wild Things Are and Rhoda in his Higglety, Piggelty, Pop! which toured from the Aldeburgh Festival via the Swedish Radio Symphony and the Los Angeles Philharmonic under Gustavo Dudamel, to the Barbican’s own 60th birthday celebrations for the composer. Other notable projects include her reimagining of Schumann’s Frauenliebe und Leben with pianist Alistair Hogarth and Jazz legend Jason Rebello. She has worked with conductors including Edward Gardner, Carlo Rizzi, Pierre Boulez, Simone Young, Marcus Stenz, Yannick Nezet-Seguin and Mirga Grazinyte-Tyla, and appeared in recital at include the Aldeburgh, Lucerne and Edinburgh Festivals, at the Wigmore Hall with the Nash Ensemble, Aurora Orchestra and Knussen Chamber Orchestra, and her regular accompanist Christopher Glynn.

Booth’s diverse discography includes Grainger Folksongs and Grieg lieder (hailed as BBC’s Disc of the Month in January 2020), with Christopher Glynn for Avie Records, Wigglesworth’s Augenlieder with the Hallé, Lucia in Britten’s The Rape of Lucretia for Decca, and the melodies of Debussy and Faure with Andrew Matthew’s Owen (CD of the Year 2019 for Classical Source). Other recordings include John Eccles’ The Judgement of Paris with Christian Curnyn’s Early Opera Company and works by Webern, Knussen, Alexander Goehr, Jonathan Dove and Augusta Read Thomas. Booth can also be found as a course director on the Contemporary Performance course at the Britten Pears School in Aldeburgh, and enjoys a burgeoning career as a radio presenter and regular contributor to BBC Radio 3’s Inside Music and Record Review programmes.