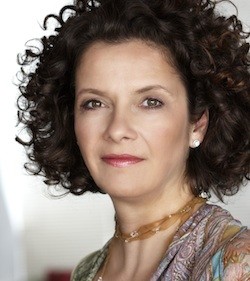 Angelika Kirchschlager was born in Salzburg, and studied at the Salzburg Mozarteum and the Vienna Music Academy. She enjoys an international career, dividing her time between recitals and opera in Europe, North America and the Far East. She is acclaimed as one of the foremost interpreters of Richard Strauss and Mozart, and of the title-roles in operas such as Debussy’s Pelléas et Mélisande and Nicholas Maw’s Sophie’s Choice.

During the 2015/16 season she gives recitals at the Schwarzenberg Schubertiade, and in London, Rome, Genoa and Stockholm. She sings Mrs Peachum (Weill’s Die Dreigroschenoper) at the Theater an der Wien, tours South America with the Camerata Bern, and appears in Die Fledermaus with the Wiener Volksoper in Tokyo.

Angelika Kirchschlager has an extensive discography on the Sony Masterworks label, and has won many awards including a Grammy. She was made a Kammersängerin of the Vienna State Opera in 2007 and an Honorary Fellow of the Royal Academy of Music in 2009.