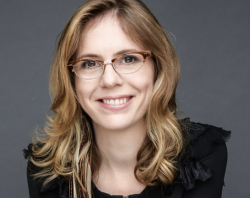 London-born Anna Clyne is a GRAMMY-nominated composer of acoustic and electro-acoustic music. Described as a “composer of uncommon gifts and unusual methods” in a New York Times profile and as “fearless” by NPR, Clyne’s work often includes collaborations with cutting-edge choreographers, visual artists, filmmakers, and musicians.

From 2010–2015, Clyne served as a Mead Composer-in-Residence for the Chicago Symphony Orchestra. Music Director Riccardo Muti lauded Clyne as “an artist who writes from the heart, who defies categorization, and who reaches across all barriers and boundaries. Her compositions are meant to be played by great musicians and listened to by enthusiastic audiences no matter what their background.” She has also been in residence with the Baltimore Symphony Orchestra, L’Orchestre national d’Île-de-France, Cabrillo Festival of Contemporary Music, Berkeley Symphony, and National Sawdust. Clyne serves as the mentor composer for the Orchestra of St Luke’s DeGaetano Composer Institute. Clyne is currently serving a three-year residency as Associate Composer with the Scottish Chamber Orchestra, through the 2020-2021 season. The residency includes plans for a series of new works commissioned over three years.

Other recent premieres include Sound and Fury, performed by the Scottish Chamber Orchestra and Pekka Kuusisto in Edinburgh; Breathing Statues, a new string quartet for the Calidore String Quartet; Shorthand for solo cello and string orchestra, premiered by The Knights at Caramoor in New York; her Rumi-inspired cello concerto, DANCE, premiered with Inbal Segev at the 2019 Cabrillo Festival of Contemporary Music, led by Cristian Măcelaru; Snake & Ladder, a work for saxophone and electronics premiered by Jess Gillam at the 2019 Cheltenham Music Festival; and Restless Oceans with the Taki Concordia Orchestra and Marin Alsop at the World Economic Forum. In July 2019, Clyne wrote and arranged music from Nico’s Marble Index for The Nico Project, a theatrical work presented by the Manchester International Festival. Clyne has been commissioned by such renowned organizations as Carnegie Hall, Houston Ballet, Los Angeles Philharmonic, and the Southbank Centre.

Clyne is the recipient of the 2016 Hindemith Prize; a Charles Ives Fellowship from the American Academy of Arts and Letters; awards from Meet the Composer, the American Music Center, the Foundation for Contemporary Arts, and the Jerome Foundation; and prizes from ASCAP and SEAMUS. She was nominated for the 2014 Times Breakthrough Award (UK).