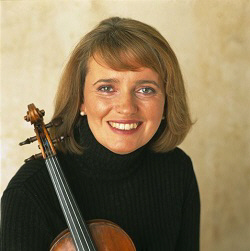 Fionnuala Hunt is one of Ireland’s most distinguished performers known as soloist, director and chamber musician with an international career that has taken her to many parts of Europe, Australia, China and the USA.

A strong advocate of the work of Irish composers she has performed in many premieres, and Bill Whelan wrote his Double Concerto ‘Inishlaken’ especially for her. Her latest project has been an exploration of the history of the Tango which resulted in her recording with the RTÉ Concert Orchestra for Avie.