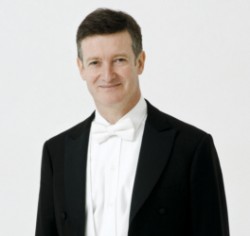 Internationally renowned as an opera and concert conductor of distinction, Harry Bicket is especially noted for his interpretation of baroque and classical repertoire and in 2007 became Artistic Director of The English Concert, one of the UK’s finest period orchestras. He became Chief Conductor of Santa Fe Opera in 2013 and opened the 2014 season with a critically-acclaimed Fidelio. Born in Liverpool, he studied at the Royal College of Music and Oxford University and is an accomplished harpsichordist.

Plans for the 2017/18 season include his debut with RTE National Symphony Orchestra of Ireland, return visits to Lyric Opera of Chicago (Orphée et Eurydice), Metropolitan Opera (Le Nozze di Figaro), Royal Northern Sinfonia, Los Angeles Chamber Orchestra, Cincinnati Symphony and a masterclass with the Juilliard School. Plans with The English Concert include European and US (Carnegie Hall) performances of Rinaldo and recording work, and with Santa Fe Opera, performances of Bernstein’s Candide.