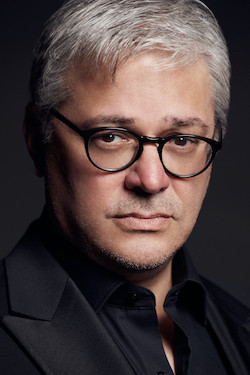 Composer Henry Dehlinger is an exciting new arrival on the contemporary classical scene. Hailed by Gramophone for his “vibrantly colorful palette” and “exquisite piano-playing,” he became a full-time composer in 2015 and has produced an impressive catalog of music for choruses, chamber groups and orchestras, as well as music for solo vocalists. Fourteen of his compositions—three choral works, one chamber work, and ten art songs—made their world premieres this 2019-20 season alone.

His compositional voice exemplifies a modern but tonal American aesthetic. Merging classical and vernacular elements, he renders themes from a diverse palette of musical styles to amplify the texts he sets. These rich musical fragments are then woven into meaningful aural experiences that Audiophile Audition calls “stunningly superb” and “formidably essential listening!” Equally celebrated are his stylish arrangements of the Duke Ellington Songbook. With their melodic lines and edgy vocal and piano writing throughout, they have widespread appeal. Fanfare Magazine calls them “superbly judged, from the lyricism through to the stride.”

Henry’s recent projects include Kohelet, a cantata in five movements for mixed chorus, soloists and orchestra. Co-commissioned by the Washington Master Chorale and the Santa Clara Chorale, it combines lush, modal melodies, energetic meters and colorful harmonic textures with Hebrew text from Ecclesiastes and Song of Songs.

The Love Song of J. Alfred Prufrock, premiering at the National Philharmonic at Strathmore, is a sweeping rhapsody for voice and orchestra that Henry adapted from the famous poem by T.S. Eliot. Composed for Metropolitan Opera soprano Danielle Talamantes, it uses the melodic and rhythmic contours of Eliot’s stream of consciousness narrative to dictate mood and melodic character.

Henry’s choral works are accessible to a broad range of ensembles and have been performed by professional, volunteer and high school choruses from across the country. His choral suite, Three Choral Songs on James Joyce for mixed chorus and piano, is especially admired and continues to be performed. His vocal chamber repertoire includes Preludes of T.S. Eliot, a setting of Eliot’s four-part poem that explores themes of modern urban life, and Amore e ‘l cor gentil sono una cosa (“Love and the gentle heart are one and the same”), a love sonnet from La vita nuova by Dante Alighieri.

Born and raised in San Francisco, Henry grew up studying piano and voice. His mentors were piano virtuoso Thomas LaRatta and choral conductor William “Doc” Ballard, artistic director of the San Francisco Boys Chorus, both of whom Henry credits for his early success as a musician. He earned a reputation as a prodigious talent, singing with the San Francisco Opera and performing with major orchestras under conductors such as Riccardo Chailly and Edo de Waart. He later graduated from Santa Clara University where he studied piano with Hans Boepple.

He and his wife Lauren and their Shetland Sheepdogs, Spy and Summer, divide their time between their home in Northern Virginia, just outside Washington, DC, and California.