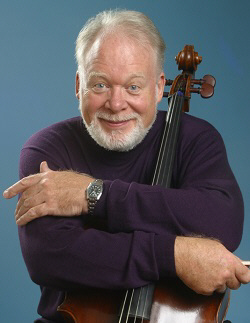 Lynn Harrell’s (1944 – 2020) presence was felt throughout the musical world. A consummate soloist, chamber musician, recitalist, conductor and teacher, his work in America, Europe and Asia placed him in the highest echelon of performing artists.

In recent seasons Mr. Harrell particularly enjoyed collaborating with violinist Anne-Sophie Mutter and pianist André Previn. During the 2003-04 season, the trio appeared with the London Philharmonic and the New York Philharmonic performing the Beethoven Triple Concerto with Kurt Masur conducting.

An important part of Lynn Harrell’s life was the Aspen Music Festival, where he has spent his summers performing and teaching for nearly 50 years.

On April 7, 1994, Lynn Harrell appeared at the Vatican with the Royal Philharmonic conducted by Gilbert Levine in a concert dedicated to the memory of the six million Jews who perished in the Holocaust.

Highlights from an extensive discography included the complete Bach Cello Suites (London/Decca), the world-premiere recording of Victor Herbert’s Cello Concerto No. 1 with the Academy of St. Martin in the Fields conducted by Marriner (London/Decca), the Walton Concerto with Rattle and the City of Birmingham Symphony Orchestra (EMI), and the Donald Erb Concerto with Slatkin and the Saint Louis Symphony (New World). His May 2000 recording with Kennedy, “Duos for Violin and Cello,” received unanimous critical acclaim (EMI). Lynn Harrell’s recording of Prokofiev\’s Symphony-Concerto and Shostakovich’s Cello Concerto No. 2 with Gerard Schwarz and the RLPO appears on Avie.

Lynn Harrell’s experience as an educator was wide and varied. From 1985-93 he held the International Chair for Cello Studies at the Royal Academy of Music in London. Concurrently, from 1988-92, he was Artistic Director of the orchestra, chamber music and conductor training program at the L.A. Philharmonic Institute. In 1993, he became head of the Royal Academy of Music in London, a post he held through 1995.

Lynn Harrell was born in New York to musician parents. He began his musical studies in Dallas and proceeded to the Juilliard School and the Curtis Institute. He is the recipient of numerous awards, including the first Avery Fisher Award.

Mr. Harrell played a 1720 Montagnana. He made his home in Houston, Texas.