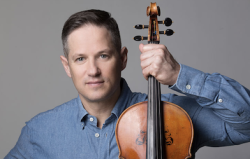 Violist of the Jerusalem Quartet, Ori Kam regularly performs both as a soloist and in ensemble on some of the world’s premier stages, collaborating with artists such as Daniel Barenboim, Isaac Stern, Itzhak Perlman, Pinchas Zukerman, Pierre Boulez, Gil Shaham, and Emmanuel Pahud. He founded the Israel Chamber Music Society and the Kam-Porat Trio with his sister Sharon and pianist Matan Porat. He has performed with the Chamber Music Society of Lincoln Center and has been guest artist in numerous festivals including Salzburg, Verbier, Tanglewood, Aspen, Santa-Fe, Schleswig-Holstein, La Jolla, the Schubertiade, and the Jerusalem Chamber Music Festival. In 2012 he released his first solo album of Telemann’s Twelve Fantasies for solo viola. His latest release (in 2019) is an album with the Kam-Porat Trio, released on Orfeo. He is viola Professor at the University of Music in Geneva. Ori Kam plays a viola made in 2009 by Hiroshi Iizuka.