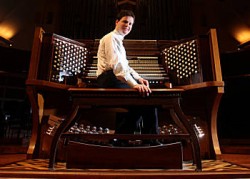 Described by The Chicago Tribune as “one of the most supremely gifted organists of his generation,” Grammy award-winning organist Paul Jacobs unites technical skills of the first order with probing emotional artistry. His performances of new works and core recital and symphonic repertoire have transfixed audiences, colleagues and critics alike.
Paul Jacobs opens his 2014/15 season at The Juilliard School performing a recital of works of Bach and Reger. Following New York he plays Poulenc with the National Symphony, concertos of Alexander Guilmant with the Philadelphia Orchestra, the Phoenix Symphony and the Edmonton Symphony, and Durufle and Respighi with California’s Pacific Symphony. Recital appearances are presented by the Dallas Symphony in Meyerson Hall, the Cleveland Orchestra in Severance Hall, the San Francisco Symphony in Davies Hall and The Town Hall and Symphony Hall in Birmingham UK. Highlights of the previous season were concerts with the Chicago Symphony led by Charles Dutoit and recitals in San Francisco, Washington DC at the Kennedy Center Concert Hall, Disney Hall and Spivey Hall near Atlanta. In July 2014, in addition to playing solo and duo recitals in Eugene and Portland at the Oregon Bach Festival, Paul Jacobs led the first 5-day Organ Seminar hosted by the Festival.
Paul Jacobs played the first concert on the newly restored Kuhn organ at Alice Tully Hall in New York, performing Bach’s monumental Clavier-Ubung III as part of Lincoln Center’s first annual White Light Festival in 2010. A favorite and frequent guest of the San Francisco Symphony, he has performed and toured with them and Michael Tilson-Thomas in varied repertoire including Lou Harrison’s Concerto for Organ with Percussion and Copland’s Organ Symphony, both of which were recorded on the SFSO label. He has been guest soloist with the Philadelphia Orchestra, California’s Pacific Symphony, the Kansas City Symphony, Miami’s New World Symphony, the Phoenix Symphony, the Cincinnati Symphony with James Conlon at the Cincinnati May Festival and previously with the Chicago Symphony and Pierre Boulez in Janacek’s Glagolitic Mass. Internationally, he appeared with the San Francisco Symphony at the Lucerne Festival and in London at Westminster Cathedral’s Grand Organ Festival.
His recording of the Messiaen Livre du Saint Sacrement, released by Naxos in 2010, was awarded that year’s Best Solo Instrumental Grammy of the Year, the first time a disc of solo organ music has received this honor.
Jacobs made musical history at the age of 23 when he played J.S. Bach’s complete organ works in an 18-hour marathon performance on the 250th anniversary of the composer’s death. He has also performed the complete organ works of Olivier Messiaen in marathon performances throughout North America, and recently reached the milestone of having performed in each of the fifty United States.
Prodigiously talented from his earliest years, at 15 Jacobs was appointed head organist of a parish of 3,500 in his hometown, Washington, Pennsylvania. He studied at the Curtis Institute of Music, double-majoring with John Weaver for the organ and Lionel Party for the harpsichord, and at Yale University with Thomas Murray.
Paul Jacobs joined the faculty of The Juilliard School in 2003, and was named chairman of the organ department in 2004, one of the youngest faculty appointees in the school’s history. He received Juilliard’s prestigious William Schuman Scholar’s Chair in 2007. His own students have won prominent national and international competitions and are forging their own careers as performers and teachers at prestigious venues and academic institutions in the United States and abroad.
In addition to his concert appearances and teaching, Jacobs has appeared on American Public Media’s Pipedreams, Performance Today and Saint Paul Sunday, as well as NPR’s Morning Edition, ABC-TV’s World News Tonight and in August 2011 he presented a recital for NPR’s Tiny Desk Concerts which remains available for viewing on www.npr.org