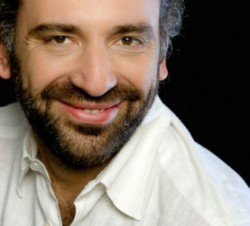 Stefano Bollani started studying the piano at the age of six and, in 1993, received his piano diploma at the Conservatory of Florence.

A fundamental moment in his career was the cooperation started in 1996 – and never interrupted – with his mentor Enrico Rava, with whom he performed hundreds of concerts and recorded twelve cds; the most recent, Tati, ECM 2005, in trio with Paul Motian on the drums, was “the record of the year” according to the French Academie du Jazz.

The referendum held by Musica Jazz magazine proclaimed him best new talent in 1998. In 2004, the Japanese magazine Swing Journal awarded him the New Star Award, reserved to the new foreign talents; that was the first time for a non-american musician.

He recorded a lot of works for the most prestigious labels (from the french Label Bleu to the German ECM) and performed many theatre shows and radio appearances, mostly on the national RAI channels. He performed as a soloist with symphonic orchestras such as the Orchestra Regionale Toscana, the Filarmonica’900 from Torino, the Giuseppe Verdi Orchestra from Milano. According to the Musica Jazz magazine he is the musician of the year 2006, while, at the same time, his CD Piano Solo, published by ECM, is the record of the year.