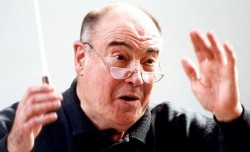 For over 40 years Vernon Handley’s career was unique amongst front rank conductors in that he unashamedly championed British repertoire before that of all other countries. Recognised as Sir Adrian Boult’s protégé he held steadfastly to two principles, which might have proved detrimental to a successful career: the undemonstrative technique and the unfashionable repertoire.

Vernon Handley probably recorded, performed and broadcast more British music than any other conductor living or dead. In some 150 discs, over 90 are British, including 87 works which had not been recorded before. He gave over 100 premieres. In his recorded output are all the symphonies of Vaughan Williams, Stanford, Malcolm Arnold and Robert Simpson, all the major works of Elgar and the whole of Moeran’s orchestral music.

He was the outright winner twice of the Gramophone Record of the Year, as well as runner up twice and nominated 8 times. He won the BPI Classical award twice and his recording of Walton’s First Symphony was declared “Collectors Choice” in Classic CD. He won a Grand Prix du Disque for a recording of French repertoire with the Philharmonia Orchestra.

During this time Vernon Handley was Professor of Conducting at the Royal College of Music and was created Hon R.C.M. & F.R.C.M by Her Majesty the Queen Mother. He was also regularly conducting the National Youth Orchestra and the World Youth Orchestra and was widely known for his encouragement of young professional players.

Vernon Handley was appointed Musical Director to the Borough of Guildford in 1962, staying for twenty-one years to establish a new professional orchestra, the Guildford Philharmonic. During his tenure the Guildford Concerts Scheme was one of the most successful in the UK, playing an extraordinarily wide repertoire and making several first-ever recordings of unfamiliar British works. In recognition of his great contribution to music in the South East, the University of Surrey awarded him a Doctorate.