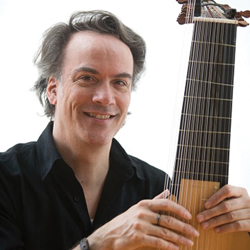 Bergeron has performed in such halls as the Amsterdam Concertgebouw, the Salle Gaveau in Paris and Lincoln Center in New York. He can be heard on 70 CD recordings, on labels including Atma, Dorian, Analekta, PGM and CBC Records. His most recent solo album, ‘The Balcarres Lute Book’ (Atma), won critical acclaim.

Bergeron teaches lute and baroque guitar at McGill University and the University of Montreal. He has given lectures and masterclasses for the Lute Society of America, and at early music festivals in Berkeley (California), Vancouver, and Rabat (Morocco).