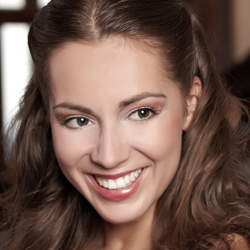 The young Slovakian soprano Adriana Kučerová studied at the school of music in Bratislava, the Conservatoire Supérieur de Musique et de Danse de Lyon and the University for Music and Drama in Bratislava.

She was an award winner at the European Music Prize for Youth in Hamburg 2001 and at the International Summer Academy Prague-Vienna-Budapest in 2002. At the International Hans Gabor Belvedere Competition in Vienna 2005 she was awarded first prize as well as the special prizes of the audience, of the Gulbenkian Foundation and of the Teatro alla Scala in Milan. After her graduation she joined the ensemble of the Slovakian National Theatre in Bratislava.

Future seasons will see her singing Rigoletto at the Tel Aviv Opera, Falstaff at the Theatre du Capitole, Toulouse and L’elisir d’amore and Le nozze di Figaro at the Bayerische Staatsoper, Munich.
Recent recordings include an acclaimed set of Mahler’s Second Symphony with the London Philharmonic Orchestra and Vladimir Jurowski (LPO Live).