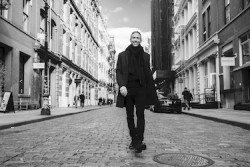 An impassioned and intelligent exponent of diverse composers, from Bach and Mozart to Kurtág and Lieberson, he strives to express the essence of each composer’s works, resulting in performances about which the New York Times wrote “Classical music doesn’t get better than this.” Possessed of an intellectual and heartfelt musical inquisitiveness, Mr. Hochman frequently juxtaposes familiar works with the unfamiliar in his concert programs to help illuminate each work for the listener, a talent further illustrated by his thoughtful recorded repertoire.

A graduate of the prestigious Juilliard Conducting Program where he studied with Alan Gilbert, he has also attended the Tanglewood Conducting Seminar, performed in masterclasses for Fabio Luisi and David Zinman, and served as musical assistant to Louis Langrée at the 2016 Mostly Mozart festival. The founder and music director of the Roosevelt Island Orchestra in New York City, he has conducted the Orlando Philharmonic, Santa Fe Pro Musica and The Orchestra Now.

Born in Jerusalem, Benjamin Hochman began his studies at the Conservatory of the Rubin Academy in Jerusalem, and is a graduate of the Curtis Institute of Music and the Mannes College of Music where his principal teachers were Claude Frank and Richard Goode. He has recorded for Artek, Avie and Bridge Records. A Steinway Artist, Mr. Hochman is on the piano faculty of Bard College Conservatory of Music and lives in New York City.