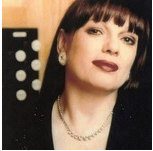 Jane Parker-Smith (1950-2020) was one of the world’s leading concert organists. A pupil of Nicolas Kynaston and Jean Langlais, she made her London debut at Westminster Cathedral at the age of 20, followed by a first solo concert appearance in the BBC Promenade Concerts at the Royal Albert Hall two years later.

She performed at major venues and international festivals all over the world, as both recitalist and concerto soloist. Career highlights included performances across the UK, Europe, North and South America and the Far East, combining solo recitals and concerts with leading orchestras. Sir Simon Rattle, Serge Baudo, Carl Davis, Vernon Handley, Matthias Bamert and Richard Hickox all worked with her.

Jane recorded a wide range of solo repertoire for major labels and has been broadcast regularly on radio and television, including featured appearances on the BBC and German and Swiss television.