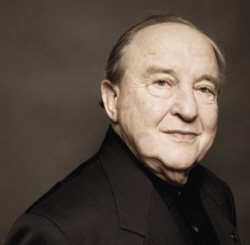 Menahem Pressler, founding member and pianist of the Beaux Arts Trio, has established himself among the world’s most distinguished and honored musicians, with a career that spans over five decades.

Menahem Pressler’s world renowned career was launched after he was awarded first prize at the Debussy International Piano Competition in San Francisco in 1946. This was followed by his successful American debut with the Philadelphia Orchestra under the baton of Maestro Eugene Ormandy. Since then, Pressler’s extensive tours of North America and Europe have included performances with the orchestras of New York, Chicago, Cleveland, Pittsburgh, Dallas, San Francisco, London, Paris, Brussels, Oslo, Helsinki and many others.

In 2007 Menahem Pressler was appointed as an Honorary Fellow of the Jerusalem Academy of Music and Dance in recognition of a lifetime of performance and leadership in music. In 2005 Pressler received two additional awards of International merit: the German President’s Deutsche Bundesverdienstkreuz (Cross of Merit) First Class, Germany’s highest honor, and France’s highest cultural honor, the Commandeur in the Order of Arts and Letters award.

Pressler has received honorary doctorates from the University of Nebraska and the North Carolina School of the Arts, five Grammy nominations (including one in 2006) a lifetime achievement award from Gramophone magazine, Chamber Music America’s Distinguished Service Award, the Gold Medal of Merit from the National Society of Arts and Letters. He has also been awarded the German Critics “Ehrenurkunde” award, and election into the American Academy of Arts and Sciences.

Internationally active as soloist and chamber musician, additional honors include England’s Record of the Year Award and Ensemble of the Year from Musical America in 1997. In addition to his busy schedule as a performer, he has given master classes in Germany, France, Canada, and Argentina, and continues to serve on the jury of the Van Cliburn, Queen Elisabeth, and Artur Rubenstein competitions.

In addition to over fifty recordings with the Beaux Arts Trio, Menahem Pressler has compiled over thirty solo recordings, ranging from the works of Bach to Ben Haim.

The 85-year old pianist fled the Nazis from his hometown of Magdeburg, Germany, in 1938, emigrating to Israel. His life has always been completely devoted to his music. When not on tour with the Beaux Arts Trio, giving solo performances, or teaching master classes, Pressler can be found teaching at Indiana University, where he holds the rank of Distinguished Professor. Pressler lives in Bloomington, Indiana with his wife Sara.