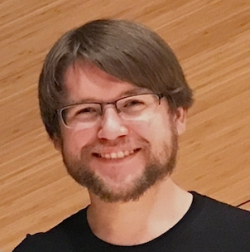 Described by the San Diego Union Tribune as an ‘international go-to cimbalom player,’ Nicholas Tolle is one of North America’s premier cimbalom artists. He has performed with the Boston Symphony Orchestra, the Boston Symphony Chamber Players, the New York Philharmonic, and the International Contemporary Ensemble. Nicholas worked closely with Pierre Boulez on his cimbalom music, having performed Répons and Éclat/Multiples under the composer’s direction. He also performed Répons with the Orchestre Symphonique de Montréal under Péter Eötvös and at UCSD under Steven Schick. He has appeared as a soloist with Collage New Music and Orchestra 2001 performing Steven Mackey’s 5 Animated Shorts, and with numerous orchestras performing Kodály’s Háry János Suite. He can be seen regularly with such groups as the Boston Modern Orchestra Project, Ensemble Signal, and Sound Icon. Nicholas was a Tanglewood Music Center fellow in 2006 and 2007 and has spent ten summers at the Lucerne Festival Academy.