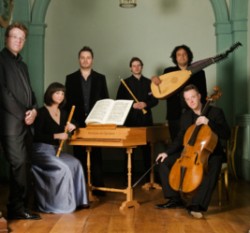 Sounds Baroque celebrates the passion, theatricality, and sheer variety of music from the seventeenth and eighteenth centuries. Comprising singers and period instrumentalists who are active both as soloists and chamber musicians, Sounds Baroque devises varied programmes that range from the despair of unrequited love in an operatic cantata to the unbridled virtuosity of an Italianate concerto.

Formerly known as Dramma per Musica, Sounds Baroque is based in London and has broadcast on BBC Radio 3, performed at international festivals in Cheltenham, London, Tel Aviv, and York, and for music societies throughout the UK. They have given world premières of works by Paul Ayres and Stephen Dodgson, and often stage educational projects in conjunction with performances. This recording is the first in a series that primarily explores the wealth of vocal and instrumental music that may have been conceived for artistic gatherings – or conversazioni – in Rome. www.soundsbaroque.com