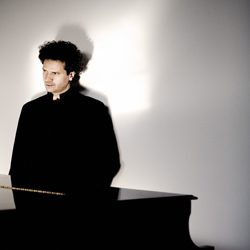 Pianist Andreas Haefliger is recognized internationally for his ability to perform the great works of the Classical and Romantic repertoire with a rare combination of power, elegance, and poetry. His interpretations spring from a rich musical culture, and have earned him the status of one of the leading pianists of our time.

Andreas Haefliger is a frequent guest of the worlds major orchestras in the U.S. and in Europe including the New York Philharmonic, the Orchestra of St. Luke’s, the Chicago Symphony, the Philharmonia Orchestra in London, the Orchester of the Bayerische Rundfunk in Munich, the Munich Philharmonic, the Salzburg Camerata, Leipzigs Gewandhaus Orchestra, the Royal Concertgebouw Orchestra in Amsterdam and the BBC Symphony. Andreas Haefliger has performed at such famous venues as the Hollywood Bowl, Carnegie Hall, the 92nd Street Y, the Berlin Philharmonie, the Mozaerteum, Wigmore Hall and London’s Royal Albert Hall.

Festival appearances include concerts with the Chicago Symphony at Ravinia; the Montréal Symphony at the Festival International de Lanaudière; the Los Angeles Philharmonic at the Hollywood Bowl; New York’s Mostly Mozart Festival; the Blossom Festival with the Cleveland Orchestra, the London Proms and the Salzburg Festival.

A prolific recitalist, Andreas Haefliger performs regularly in major music capitals throughout Europe and the United States, and in summer festivals including Lucerne, Copenhagen, Kuhmo, Tanglewood and Ravinia. He has appeared with the Takács String Quartet on tour in the United States. In addition to his other musical partnerships, he performs with his wife, flautist Marina Piccinini, at various venues including Washington DC’s Kennedy Center.

Andreas Haefliger grew up in a musical household and by the time he was fifteen he had lived in several European capitals. He completed his studies at the Juilliard School where he was twice awarded the Gina Bachauer Memorial Scholarship. He makes his home between New York and Vienna.