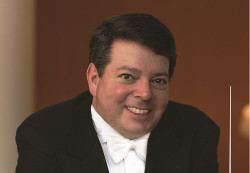 He continues to guest conduct the world’s leading orchestras and opera companies and has a discography of over 120 recordings with awards including America’s Grammy, France’s Diapason d’Or, and many other honours.

Under Litton’s leadership the Bergen Philharmonic gained international recognition through extensive touring, making debuts at London’s BBC Proms, Amsterdam’s Concertgebouw and appearances at Vienna’s Musikverein, Berlin’s Philharmonie and New York’s Carnegie Hall. They made 25 recordings, and in recognition of Litton’s service to the cultural life of Norway, Norway’s King Harald knighted Litton with the Royal Order of Merit.

Litton’s relationship with the BBC Symphony Orchestra began in 1982, when he became the youngest-ever winner of the BBC International Conductors’ Competition, leading to his debut concert as a conductor. Also an accomplished pianist, Litton often conducts from the keyboard and enjoys performing chamber music with his orchestra colleagues.