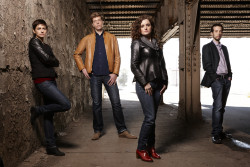 Distinguished by its virtuosic playing and impassioned interpretations, the Ariel Quartet earned its glowing international reputation early on. Formed in Israel nearly twenty years ago when its members were still students in middle school, the Quartet was recently awarded the prestigious Cleveland Quartet Award. The Ariel has served as the Faculty Quartet-in-Residence at the University of Cincinnati’s College-Conservatory of Music (CCM) since 2012, where its members direct the chamber music program for strings and perform their own annual concert series, continuing the legacy of the legendary LaSalle Quartet.

The 2015-16 season featured their sold-out debut at Carnegie Hall, and recent seasons have also included multiple Beethoven-cycle performances in the U.S. and Europe as well as frequent collaborations with artists such as Alisa Weilerstein, Jeremy Denk, and Menahem Pressler. Additionally, the Ariel was quartet-in-residence for the Steans Music Institute at the Ravinia Festival, the Yellow Barn Music Festival, and for the Perlman Music Program, and was the Ernst Stiefel String Quartet-In-Residence at the Caramoor Festival.

The Ariel Quartet has been mentored extensively by Itzhak Perlman, Paul Katz, Donald Weilerstein, Miriam Fried, and Kim Kashkashian, among others, and spent a formative year in Basel, Switzerland, for in-depth studies with Walter Levin, the founding first violinist of the LaSalle Quartet. During their formative years in Israel and the United States, the Quartet has been supported extensively by the Jerusalem Music Centre and the America-Israel Cultural Foundation.

Formerly the resident ensemble at the New England Conservatory’s prestigious Professional String Quartet Training Program, the Ariel has won numerous international prizes including the Cleveland Quartet Award, the First Prize at the International Competition Franz Schubert and Modern Music, the Grand Prize at the Fischoff National Chamber Music Competition, and the overall Third Prize at the Banff International String Quartet Competition as well as the Székely Prize for their performance of Bartók. After that performance the American Record Guide described the Ariel Quartet as “a consummate ensemble gifted with utter musicality and remarkable interpretive power.”