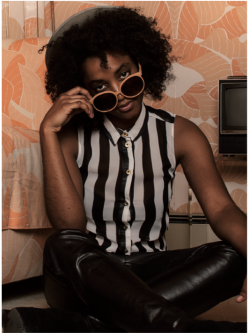 Praised for her rhythmic precision and dynamic range, harpist Dr. Ashley Jackson enjoys a multifaceted career as a highly sought-after musician and collaborator in New York and beyond. She has appeared on stages in New York and around the world including Avery Fisher Hall, Park Avenue Armory, Royal Opera House in Muscat, Oman, and the National Center for the Performing Arts in Beijing, China.

Throughout her academic and professional careers, she has demonstrated a commitment to diversity and inclusion within higher education and the performing arts. Her speaking engagements have included “Affinities: Margaret Bonds and Langston Hughes” (Studio Museum of Harlem) and “Representation as Resistance: How an Activist Orchestra Redresses the Push-out of Black Practitioners from Classical Music” (Harvard University). As a writer, her works have appeared on NewMusicBox as well as in the International Journal of Women in Music. She holds degrees from Yale University (BA, MM) and The Juilliard School (DMA), where her research on Bonds was the subject of her dissertation, “Margaret Bonds and The Ballad of the Brown King: An Historical Overview and Analysis.”