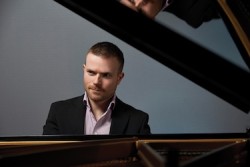 David is also a much sought after chamber musician and performs regularly with internationally renowned artists including oboist Nicholas Daniel, clarinettist Michael Collins, violinist Nathaniel Vallois and soprano Ailish Tynan. He performs regularly with his sister, the violinist Joanne Quigley in both duo recitals and in trio recitals with cellist Jonathan Aasgaard.

Born in Ireland in 1977, David began his musical studies at the age of four. He attended the Leinster School of Music, Dublin, studying with the renowned Irish teacher Mabel Swainson. In 1996 he entered Birmingham Conservatoire where he worked with the pianist/composer Philip Martin, graduating in July 2000 with a first class honours degree and the Principal’s Prize. As a result of winning the Joseph Weingarten Scholarship, David continued his studies at the Franz Liszt Academy, Budapest, with Balázs Szokolay and later with Brigette Engerer at the Paris Conservatoire.

In 2002, David was selected as the UK’s representative for the European Concert Hall Organisation’s Rising Stars series resulting in critically acclaimed debut recitals throughout Europe and the USA. His many national and international competition successes include winner of the inaugural Clandeboye Young Musician of the Year Competiton, the Royal Over-Seas League Piano Competition, the Ulster Bank Music Foundation Award, the Carnwath Scholarship and silver medal from the Worshipful Company of Musicians London. He is also a former finalist of the RTÉ Young Musician of the Future Competition and the B.B.C. Young Musician of the Year Competition. He has been awarded major scholarships from the Martin Musical Trust, Musicians Benevolent Fund, the Myra Hess Trust, Northern Ireland Arts Council and the Wingate Foundation and he is a former winner of the Making Music Young Artist Award.

Aside from performing, David is passionate about musical education. He is a member of the piano faculty at Birmingham Conservatoire, one of the UK’s leading music colleges. He is co-founder/director of Newry Chamber Music, a concert society that provides concerts and education projects in his home town and surrounding areas. David is also frequently invited to give Masterclasses and to adjudicate piano competitions throughout Ireland and the UK.