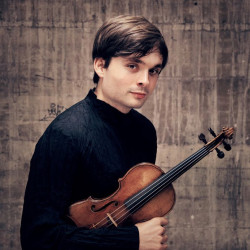 Spanish-born violinist Francisco Fullana is one of the first international solo violinists to fully embrace and absorb the baroque language of historical performance. Hailed as a “rising star” (BBC MUSIC MAGAZINE), he is the winner of four international violin competitions as well as an Avery Fisher Career Grant. His Carnegie Hall recital debut was noted for its “joy and playfulness in collaboration… it was perfection” (NEW YORK CONCERT REVIEW). Born into a family of educators, Francisco was raised in Mallorca and Madrid and was recognized in Spain as a prodigy.

He moved to the U.S. at the age of 16 to study at The Juilliard School. His primary teachers and mentors for the next 8 years were Donald Weilerstein, Masao Kawasaki, and Midori. His lifelong fascination with baroque music has influenced both of his prior recordings: his 2018 debut album, Through the Lens of Time (Orchid Classics) and his 2021 solo album, Bach’s Long Shadow, which juxtaposes Bach Partitas on gut strings and baroque setup with virtuoso solo violin works from the next three centuries. As a concerto soloist, his engagements have included the Bayerische Philharmonie, Münchner  Rundfunkorchester,  City  of  Birmingham   Symphony,   Vancouver Symphony, and St. Paul Chamber Orchestra, among others. He is Artist-in-Residence with Apollo’s Fire, performing as soloist with the GRAMMY®-winning period band at Carnegie Hall and Cleveland’s Severance Hall in 2022.As a chamber musician, Francisco is a Bowers Program Artist at the Chamber Music Society of Lincoln Center. His many performances have included the Marlboro Festival and the Perlman Music Program, as well as collaborations with Mitsuko Uchida and members of the Guarneri, Juilliard, Pacifica, Takács, and Cleveland quartets. Using gut strings and a baroque bow, Francisco performs on the 1735 “Mary Portman” ex-Kreisler Guarneri del Gesù violin, on loan from Clement and Karen Arrison through the Stradivari Society of Chicago.