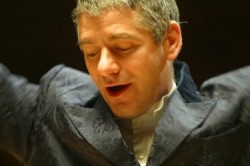 Grant Llewellyn is renowned worldwide for his exceptional charisma, energy and authority in music of all styles and periods. As Music Director of the Handel & Haydn Society, America’s leading period orchestra, Llewellyn gained a reputation as a formidable interpreter of music of the Baroque and Classical periods. On the other side of the spectrum, his first complete season as Music Director of the North Carolina Symphony in 2005/06 included a series of concerts called “Crossing the Atlantic” featuring contemporary composers and works from the United States and the UK.

He has guested with many of the major British and European orchestras and, since winning a conducting fellowship to Tanglewood in 1985, has made frequent appearances in the US. He was Assistant Conductor of the Boston Symphony Orchestra in the early 1990s and makes regular appearances with orchestras in Canada including the Calgary Philharmonic Orchestra.

Also in demand as a conductor of opera, recent projects include his debut with Opera North conducting Massenet’s Manon and several productions with the Opera Theatre of St Louis.