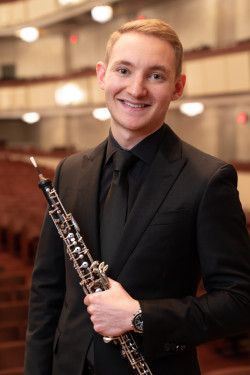 Harrison Linsey joined the San Diego Symphony in 2015 as second oboiost and began his tenure in the same position with the National Symphony Orchestra in the fall of 2018. In recent seasons, he has since performed on oboe and English horn with the Metropolitan Opera, Los Angeles Philharmonic, and Pittsburgh and Seattle Symphonies, and as guest principal with the Sarasota Symphony Orchestra. Linsey received his Bachelor’s degree from The Juilliard School in 2015, where he studied with Elaine Douvas and received additional instruction from Nathan Hughes. In the summer months he performs with the Mainly Mozart Festival Orchestra, and for two years had the pleasure of serving as the Oboe Fellow at the Aspen Music Festival and School, where he studied with Richard Woodhams, Ariana Ghez, and Frank Rosenwein.