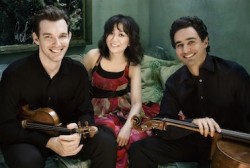 Hailed by The New York Times as “impressive, lithe, persuasive,” when the members of the Horszowski Trio (Hor-SHOV- ski) – Jesse Mills, Raman Ramakrishnan, and Rieko Aizawa – played together for the first time, they immediately felt the spark of a unique connection. Many years of close friendship had created a deep trust between the players, which in turn led to exhilarating expressive freedom.

Two-time Grammy-nominated violinist Jesse Mills first performed with Raman Ramakrishnan, founding cellist of the prize-winning Daedalus Quartet, at the Kinhaven Music School over twenty years ago, when they were children. In New York City, they met pianist Rieko Aizawa, who, upon being discovered by the late violinist and conductor Alexander Schneider, had made her U.S. debuts at the Kennedy Center and Carnegie Hall. Their musical bonds were strengthened at various schools and festivals around the world, including the Juilliard School and the Marlboro Festival.

In the four-year period following their debut performance at Rockefeller University in NYC in December 2011, they were booked for almost 200 concerts in the U.S. and tours of Japan and India. They have continued their successful rise in the chamber music world, earning the praise of critics and audiences alike. The New Yorker has called them “the most compelling American group to come on the scene.” The trio will return to Asia for another tour in the Fall of 2018, and they will make their European debut in 2019, including a performance at London’s Wigmore Hall. They often collaborate with guest musicians, including violists, clarinetists and singers. Recent guests include members of the Guarneri, Pacifica and Tokyo Quartets.

Ms. Aizawa was the last pupil of the legendary pianist, Mieczysław Horszowski (1892-1993), at the Curtis Institute. The Trio takes inspiration from Mr. Horszowski’s musicianship, integrity, and humanity. Like Horszowski, the Trio presents repertoire spanning the traditional and the contemporary. As an ensemble-in-residence of the Electric Earth Concerts, the Trio premiered the work by Eric Moe “Welcome to Phase Space” in 2014. They have also recorded “For Daniel” by Joan Tower for a part of the celebration album of the composer’s 75th birthday. The violinist of the Trio, Jesse Mills, who is also a composer and arranger, has written a work for the group “Painted Shadow,” which was commissioned by and premiered at Bargemusic in Brooklyn, NY in January, 2015.

In addition, they seek to perform works from the trove of composers with whom Horszowski had personal contact, such as Ravel, Saint-Saëns, Fauré, Martinu, Villa-Lobos, and Granados. Their debut recording, an album of works by Fauré, Saint-Saëns, and D’Indy – in memory of Mieczysław Horszowski – was released by Bridge Records in 2014. Gramophone called them “a highly accomplished group,” and raved: “exemplary performance… I long to hear more of the Horszowski Trio.” After their successful debut recording, they have two more upcoming projects: an All-Schumann Piano Trios disc, as well as an All-Brahms Piano Quartets set with Masumi Per Rostad from the Pacifica Quartet.

Based in New York City, the Horszowski Trio is Artist-in-Residence at the Longy School of Music of Bard College.